Managed to lock myself out of the back-end after an update to this site and obviously not backing it up before doing said update. Did not manage to fix it so I just left it as was, but now I got it back up and running again. No more promises on update that I`ll likely not keep. I will happily take my time fine tuning the posts I was working on before I lost access and then we`ll see what happens next.

As for now I`ll chuck my response to a question on Facebook.

No disrespect and I’m being serious but why do men buy 250s and 300s?? Besides them being cheap. I’m on a 750 naked and hate it lol. Can I get some feedback please

Response from me (slightly edited):

My perspective on the matter is that the more power you have, the faster you have to go to have the same amount of fun as on a smaller bike. That’s based on having owned a ’07 Tuono for a while, BMW R1200RT. Ridden my mates ’04 1000 Fireblade and a shit ton of other bikes while working at a BMW dealership. Yet, after 12 years of riding (doing it since I`m legally allowed to). The main bike I’ve been getting around on is a Guzzi V50 nato (’85), been all over Europe, all over NZ and now trying to sight see Australia with it. I averaged in between 30.000 to 35.000km a year when I lived in NL. My average went down slightly when I left Europe but still around the 25.000km mark. 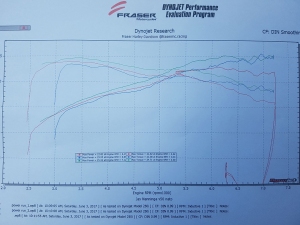 Had it on the little Guzzi on a dyno a few weeks back at Frasers with the following result 25hp with 25nm at the rear wheel….. It’s not quick at all and the majority if not all cars out there could easily beat me at a standing sprint as I’ve experienced with a granny who had quite a heavy foot.

Yet for some reason when my blood gets flowing in the twisties, I`ll end up going from cruising at the rear of the pack to working my way to the front section of the pack. Shifting my ass off, trying to keep momentum, and sweating like crazy at the next stop due to all the work that needs to be put in to keep the little one going at speeds and having such a big grin on my face that I`m surprised I don`t cramp up. Definitely beats going to the gym.

Having done the same things with a ton more power…. my view is that it just becomes too easy. You tend to end up in one gear all the way through because the gear is so long. I prefer to work on a bike, everyone can ride fast in a straight line, but for me the most fun is in the twisties (the tighter the better, as the Guzzi just doesn`t have the oomph to handle long corners or even steep uphills). In the twisties the only difference between a 250 and a 1000 would be the amount effort you`ll need to put into it and a bit of extra weight. Also I believe people have a tendency to get lazy if they ride high hp bikes exclusively for too long. Losing the smooth riding style they’ve hopefully gained while riding something with less power. Replacing it with breaking hard for corners, going slower through said corner than they did on the lighter bike, and then flooring it getting the kick of acceleration. All the while believing they’re faster than they were before….. which they are…. just not in the corners 😥 .

So if you end up with someone right up your ass through the corners, but disappearing in your mirrors on the straight… and then they’re right back there in your mirror in the corner. Please let them pass, and see how they do through the corners. It’s a nice way to see how others do it, you`ll probably make them happy as well. You might need miss out on a few kicks from acceleration but cornering might end up faster. And hey, if they end up holding you back through the corner, you more than likely will have enough power to overtake them again anyway with just a minimal blip on your throttle.

One Reply to “Back in action”