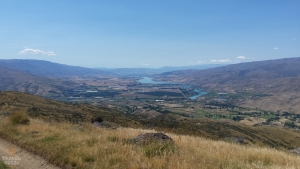 So the first day of Bannockburn, the 31st of January, my birthday. Was invited to ride along with a bunch to do the Carrick town track. No experience on anything other than nice flat gravel, I thought “what could possibly go wrong” as I do quite often. Well…. my brain not being able to cope with what needs to be done is what can go wrong. I felt like riding for the very first time, my bike wanted to move in all sorts of directions and ways that I (being a road rider) didn’t really want it to go although I`m fully aware of the “the bike will find it’s own way” rule. This was so far outside of my comfort zone that my brain functions basically came to a halt. After a couple of serious fuck-ups I let Alan go in front of me so that I could follow him.  Not asking my brain to find the best way to attack the track but just ask of him to follow Alan made things a lot easier. Somewhat halfway through we came across a dude on a proper off-road bike telling us that there were a couple of 4×4’s coming up and that we should wait, so we did. He kept looking a little weird at my bike, probably wondering what a roadbike was doing up there. Andy, Paul and Logan were already well ahead of us, and by this time were thinking something along the line of “They went back because the Guzzi can’t handle it”. HA! How wrong they were… Finished the whole thing up to Duffers Saddle and then went back to Bannockburn with Alan for some well earned rest. In total it wasn’t a long ride at all but having no experience with anything resembling what I just did I was incredibly tired and proud of what the little V50 just did. 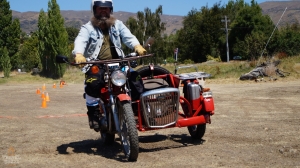 Just to top the whole thing off we off course did a little bit of gymkhana with the bike, got the chance to try it on a crf250 as well. Man there’s a huge difference between racing over bumps with something that actually represents an off-road bike compared to a road bike. However Alan managed to win the bikekhana with his sidecar (also the only sidecar to enter)

Day 2 and time for the Nevis road, starting a little bit behind everybody else we were overtaken by Andy shortly after we left. When Alan and me arrived at the Duffers saddle, Andy came toward us pointing at his rear wheel and speeding off again back to the camp. Halfway through the Nevis he overtook us again, and by the time Alan and me were just around the corner from the end Andy came towards us once more, already finished his break. 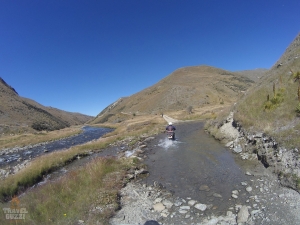 Anyhoo! The Nevis road, long, dry, beautiful, lots of fords, beautiful water and low flying airplanes! There is just so much to see on the Nevis it’s nuts, after doing the Carricktown track this was a walk in the park. This time around the only new things were fords to cross, although none of the were really deep it was exciting to come to grips with another thing I never did before on two wheels. Teaming up with Alan (as I did the whole week) we did a nice relaxing ride through the whole thing. Taking breaks and scenic locations (makes me wonder if there were any none scenic locations), drinking water from tasty streams, visiting lonely graveyards and ruins of huts and holes in the ground where people once searched for gold with still old/rusty and rotten equipment lying around. The atmosphere surrounding this road is just amazing, visiting Inverneviss is definitely a must when you do this road. Not that you have much choice since you’ll be passing through it on your way to either Garston or the other way around to Bannockburn. At one stop I noticed one of my exhaust hanging a wee bit on the low side, on closer inspection it appeared that the bike and a bolt got into a fight that resulted in the bolt just leaving the bike never to be seen again. That meant that my poor muffler didn’t really have anything to help it stay attached to the bike. It also meant that my back frame was little bit less though than it should be since it lost one of it’s links. Ah well, nothing zip-ties can’t fix! But it did mean that we wouldn’t ride back over the Nevis but instead take the main road from Garston. 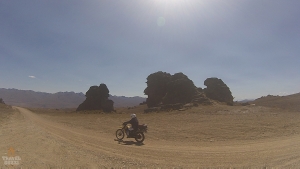 The evening following the Nevis ride Danielle from Motomonkey Adventures held a presentation about the trip she did travelling to Africa on a bike by herself. No use talking about the presentation other than that it was inspiring hearing the stories . If you ever get the chance to be at a presentation of sorts of someone who has traveled the world… GO!

Day 3 consisted of the Hawksburn, Crawford Hills a part of the Old Dunstan (up to Poolburn Reservoir) and the Thompson Gorge road on the way back. Today Alan and me were joined by forgot-his-name (I want to say Ron but I`m not sure) and Guido (Facebook, Blog). Lilian took a break from riding and went for the option of visiting wineries in the area. 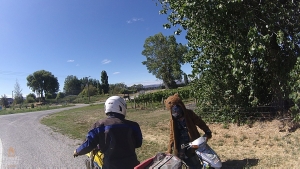 Overall a fun day with some nice roads to ride going up to Poolburn reservoir and back. Seeing some LOTR sights and of course Bunny Rock! One piece of advice though, if you ever get the idea of doing the Thompson…. make sure to bring friends…. the amount of gates on the track are just ridiculous and sometimes in very annoying locations when you need to park up your bike. 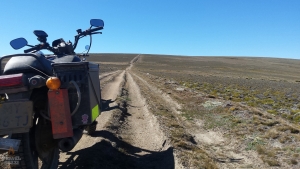 The very next day was also my last day of riding during the bikeweek. Today we went for the Old Woman, Old Man and the Hawksburn again. I was led to believe that the Old Womans range normally isn’t open for motorcycles but that they made an exception for us. Going up to the Duffers Saddle and just after the Saddle there was a nicely hidden left turn that we missed to first time we passed. Interesting roads were to follow that made my life just as hard as the Carricktown track did. Mainly due to deep tracks and stubborn tussocks. At times the panniers of my bike would just slide over the ground on either side of the track that I was going through.

Going off track wasn’t really an option due to the mentioned tussocks. The one time I had the amazing idea of going in between the tracks on the higher ground (about halfway through), the darn things bounced me into a tire track, which bounced me out again and after a short zig-zag I dropped the bike and injured my knee in the process. Apparently knees don’t do sideways movement very well. Ended up being Alan junior for the remainder of the bikeweek. We got to see some snow though, even though it was well over 30 degrees up there. I was doing the whole thing basically in first or second gear at times so no speed at all, the snow looked very comfy to lie in but sadly a bit to far away.

This evening there was a talk done by Bill Veitch from McIver&Veitch, sharing stories & experiences he has had over the years. Talking about his collection of bikes. Stories and experiences that I hope I can one day compare to similar ones of my own once I’ve reached his age.

As mentioned day 5 for me was a day of chilling, eating cheesecakes, limping around the place and reading my books. Spent the day outside the Bannockburn Hotel enjoying the views and the weather, spending money on non-alcoholics instead of petrol. 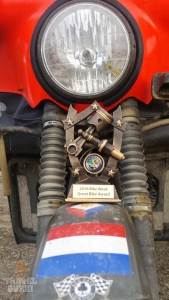 What more could one want (except for a proper working knee). There was also a prize giving this evening and my little bike managed to win grab the “best bike award”! The day thereafter I could walk normally again, just as I predicted, proving all the “you should go see a doctor” chats wrong. My plan was to go to Queenstown again but Logan convinced me to join him and go the Vincent Count Rally in/near Alexandra.

The Vincent County Rally was definitely more along the lines of rally’s that I see happen back in the Netherlands. Arrive, park your shiny ass bike, go drown yourself in beer and food accompanied by live music. After pitching our tents we went for a little ride and try to get off the tarseal. Once back we ended up meeting Nicole, from Sweden but really from Germany. Decided to spend a big holiday in NZ, renting a bike, ignoring the “you can’t go there” clauses and generally just having fun. 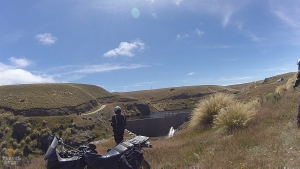 We ended up joining forces with Nicole, Nigel, Annette and Al, doing the Old Dunstan up to the Poolburn reservoir but this time continuing on to lake Onslow. Absolutely stunning ride, I could myself being way more confident on the bike than when I started a week earlier going off the beaten track. Stunning day, we even managed to surprise a truck that came around the corner…. or did that truck surprise us…. I`m not quite sure.