So I spent a nice week in Christchurch enjoying the weather and the occasional rain but luckily not that much. Couch surfing at my mates place, someone I flatted with in Groningen for a while who’s now helping in the Christchurch rebuild. Somewhere that week we went surfing (my first time ever) for only about 30 minutes, but the very last wave I was able to stand on the board, be confused and fall off in about 3 seconds. Felt good, want to do it again :O (didn’t happen though)

Came across someone that mentioned the New Zealand bike-week was happening, sounded big, sounded like it could be fun so I wanted to go. That meant, getting my ass over to Bannockburn. The moment I wanted to leave it started raining -_-, so I went back in made a coffee and thought about whether or not to go, my mate rang and assumed I’d stay for one more day. Lucky for me, shortly after that call the rain stopped so I grabbed my gear and rode towards Tekapo. I managed to get out of Christchurch with only a little drizzle, but enough to cool me down a bit to much. Coming out of some hilly bits, there was one lone building in the distance, with a big ass coffee cup on it’s roof…. that of course meant hot drinks, a pie and warming up before continuing. 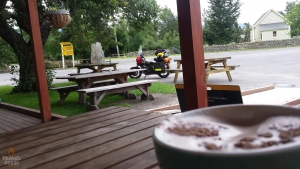 All the way over to Tekapo it was cloudy and cold, especially when going through the pass just before reaching the town. But…. once out of that pass the skies cleared and sun warmed me up, the clouds were slowly spilling over the mountains….. it was just stunning. Anyhoo, went to a campsite and parked up, the goal was to see the sunset from Mt. John (not knowing you can’t get up there by yourself after a certain time. Not wanting to go back just yet I continued down the road looking for a nice spot to watch that darn sun go down. Only then you realize how much fences there can be alongside the road, so I joined one. Parked up next to a gate and watched everything from the side of the road, trying to look over the hills but failing. Stunning nonetheless but to many clouds at night to enjoy the stars. 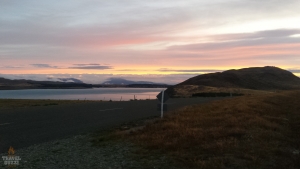 Day 2, today is the day that I will reach Bannockburn. I probably didn’t tell myself that in that way but I should’ve because I did in fact reach Bannockburn and saw some cool stuff along the way and did some stupid stuff as well. Wanting to take some back roads I had the Hakataramea (sounds as if it came from Hitchhikers Guide to The Galaxy) and Danseys pass planned for today. Both of which were beautifull and I can recommend doing the Danseys from Duntroon to Naseby, going from barren landscape to green with little waterfalls.

Anyway where was I, leaving Tekapo in the morning aiming for breakfast in Kurow…. right.

Double backing on myself for a few kilometers to take the turn (Dog kennel corner or something?) going towards the Hakataramea, just before actually getting the Haka pass turn-off I saw a path trailing off into the distance, which appeared to where the Haka pass road should be. Me wanting to get the hang of off-roading decided I would take that route and below you can see what I was looking at. 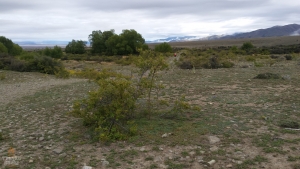 After probably 300 meters or so I was contemplating whether or not I should turn around, but I still had a cell signal so I just texted a mate of mine to tell him what I was about to do and order him to get worried if he wouldn’t hear from me again that same day. So with all the risks covered I soldiered on, got comfortable and decided not to pay attention when I needed it most…. and jumped with my bike. Which isn’t a good thing when you’re on a fully packed road-bike. I left a souvenir, a silver coloured 1,5ltr Kathmandu flask…. if anyone finds it, please return it because of emotional value O.o . Finally reaching the Hakataramea Valley Road it was smooth sailing from there to Krukow, stunning views, not going very fast due to lack of experience on gravel but having tons of fun.

From Krukow where I fueled up both myself and my bike I headed to something that just said “Earthquakes” on my map. Which ended up being some interestingly formed walls. From there it was a short way to the start of the Danseys pass, a pass I can recommend taking. Easy and beautiful… what more do you want? Probably about halfway through a guy showed up in my mirrors so I let him pass, saw him a couple of minutes later having a break on the highest point apparently, but so cloudy you couldn’t see anything. He stopped where I was taking a little break further down, where the sky was clear and we had a nice chat. He was also headed to Bannockburn, we split ways but of course ended up meeting again. 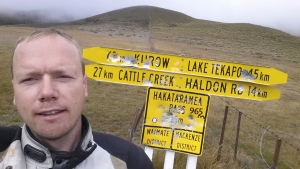 Shortly before arriving in Cromwell I saw fellow biker being stranded on the side of the road, I turned around the first chance I got and stopped. All was well, just a flat tire and a friend was on his way to help.What surprised me was the fact that he stood there for 45 minutes in the burning sun, no shade whatsoever and no one stopped. He said that quite a bit of bikers went by but not one of them had the courtesy to stop and see if he was okay. Sure it wasn’t the best place to stop, but for all we knew something could’ve been terribly wrong. Luckily none of that and the day stayed beautiful.

Once arriving in Bannockburn, signing up for the Bikeweek, setting up shop and getting a drink. I joined a couple of guys at their table and had a chat. They ended up becoming friends that helped me out quite a bit with getting the hang of adventurous riding and allowing me to stay at their place after Bikeweek……….