Finally a chance to go through Paradise and visit Chinaman`s Bluff where a lot of sandflies fell in love with my leg, followed by seeing Milford Sound. First things first though….

The bike was in severe need of some new rubber at the back, so it was a good excuse to once again ride that fine road that lies between Queenstown and Glenorchy where I pitched my tent once again. Then went of to go and see what Chinaman’s Bluff was all about. The road going there is stunning, the scenery is epic and you travel through some more LOTR environments. The Bluff itself though.. not that impressive, as I was there the walk wasn’t sadly possible due to some problems with the track. Also in the 3 minutes it took me to walk from my bike to the Dart River I got stung 7 times by sandflies. For those of you in the know….. they itch! Following that I went back to Frankton (Queenstown) to the Yamaha shop and 8fiftycc café. Hoping that the Yamaha central could get me a fresh tyre for my bike. They were able to source one although it would take a day or two in total to get it all done. Having tried a burger at the 8fiftycc café I didn’t mind waiting two days. If you get the chance, the burger at that place is way better than Fergburger! 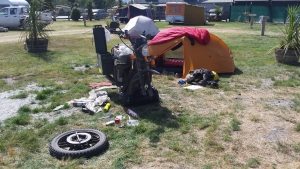 The whole waiting ordeal also gave me some time to inspect the front forks on my bike, ever since the first day of Bikeweek I had the feeling they were shot. And indeed they were, one of the fork dampers was completely pulled apart. No chance whatsoever to fix it, I just put it back together with a promise to myself to not do anymore wheelies. Went on the hunt for a fresh damper and was contaacted by MW-Motoren from the Netherlands who was willing to sponsor me the needed parts much to my surprise. Those parts would arrive in NZ just as I was re-entering Christchurch. Having put everything back together and now knowing where I needed to be more careful when riding, the exploring of NZ could continue.

After a new rear tyre was fitted it was time to finally go to Milford Sound. On the way to Te Anau where I wanted to camp again, I turned right in Mosburn and saw two familiar bikes standing at one of the cafés. I just happened to bump into Guido & Lilian again, they were just about to finish their drinks but were willing to hang around a bit and exchange some stories! Good times and just goes to show how small NZ actually is when you’re travelling. As all good things come to end we parted ways, me to Te Anau and they were off to Queenstown. 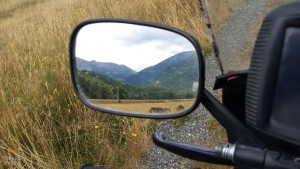 Left for Milford early in the morning, hardly any traffic on the road so I decided I would stop for scenery on the way back and just enjoy the road while I had the chance. The view you get once you reach the valley is breathtaking, I just cannot describe what I felt when I  saw it. It definitely is one of the top roads I’ve ridden in NZ. Once in Milford I tried to get on one of the boats and get to see everything they had to offer but everything was fully booked untill 4 PM. Since I arrived a 9 AM that wait was of course way to long, so I ended up chatting to some other motorcyclist for a good 2 hours before I actually left.

Heading down along the edge of the Fiordland National Park I was in for some more beautiful scenery, be it not as amazing as the ride to Milford and back. Now those Amazing Fiords were just being their picturesque self in the distance. I made it down all the way to Tuatapere where I got to bored with the roads and decided I would just hammer it to Dunedin. All in all it was close to 800 kilometers that day, my ass was sore but hey I got to see some pretty things once again. 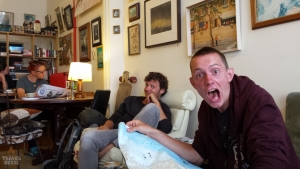 Why back to Dunedin? Pretty simple, it’s nice town with a good vibe to it, it’s a good staging area to do some rides, Bas and Bas were there and Lyndon Poskitt would be doing a presentation about his trip. So I ended up doing another big chunk of the Old Dunstan… where straight at the start I could choose between a little ford or a bridge. Or more accurately, I could choose between a ford and trying to hammer through a bull, you guess which option I went for. And update travel stories with both Bas and Bas while enjoying a cup of coffee in the morning. 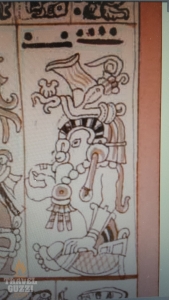 At Lyndon’s presentation I got to meet some more serious motorcycle travelers. A German couple, Heiko (following the Ink trail as Notch the World), Fern who came over from Queenstown and then some. All in all a good evening with many stories being shared.  These were the stories that eventually made me go click with the kind of tattoo that I wanted.

Continuing my journey ever so slowly I stopped at the Herbert Forest Campsite after some more gravel roads and enjoyed a very quiet stay at a very beautiful spot. While there I arranged to stay with Logan the following day and turn an otherwise 100ish kilometer and 1 1/2 hour trip into something 3 times that length and definitely a whole lot longer. Going up to Duntroon, Meyers pass and then some more back roads along Hunters Hills.  Got to explore Timaru for a bit, spend some time with Logan and get the centre stand fixed. Got invited along to a late night hunting party to see what that was all about and somewhere along the way in those days decided on what tattoo to get.

Contacted Heiko, see where he was at and whether or not he was willing to help me out with my eureka moment. Decided to meet up in Christchurch, which was absolutely perfect because that meant I could let the tattoo heal while staying with a friend of mine.

It also meant two weeks of daily earthquakes and not really being able to do anything fun. Keep the darn thing covered couldn’t really do beach because there would be a ton of sand stuck the cream. ‘t Was a lovely two weeks -_-.  But hey, I got something I had wanted ever since I was little kid.

The tattoo: Xaman Ek, basically a god of travel (although some papers say something completely different), done by a traveler (Heiko) on the leg of someone who will eventually finish his world trip (me).