About those weird noises… definitely wasn’t the center stand as I found out on the road to Paradise. The corrugation was the worst I’ve come across so far. And all of a sudden there were some major bangs coming from the bike followed by a serious scraping noise. Stopped the bike for a closer inspection and still couldn’t see shit. Rotated the rear wheel but felt nor heard anything. Assumed it was the shaft drive and decided to slowly limp back to my tent. 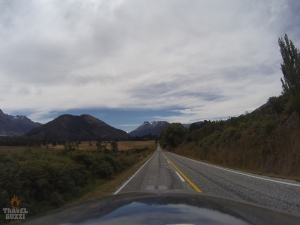 That corrugation…. I did a good 10 to 20 km/h on the way back and every other bump there was a big bang. Once I reached sealed road, no more banging so I upped the speed to about 60 trying to be a smooth as possible on the throttle. The bike only banged a couple of time and understandably I cringed when it happened.

Still being worried about it being the drive shaft that fucked up I started taking the bike apart behind my tent on the campsite. Knowing full well how expensive a drive shaft would be I was happy for a split second when I saw it was still mint. Then my fear got even worse….

What if it’s the Crown wheel and Pignon, fuuuuuuck that’s expensive and hard to get. Drained the oil, and that was full on metallic…. I wasn’t happy :(. Continuing dismantling the rear drive I was amazed at what I found. Fully prepared to finding everything destroyed it was more along the lines of Howard Carter opening Tutankhamun’s tomb. Sure it didn’t look as good as it did when they closed the tomb, but man it was a relief to see that there was still stuff to work with on the inside.

The crown wheel is being held in place with 6 bolts, 4 of which had sheared off and were grinded into the oil. Nothing was left of the 4 bolts but 1 head, strength grade 10.9….. Not enough for the amount torque required according to the workshop manual. The result of that mayhem looked amazing. 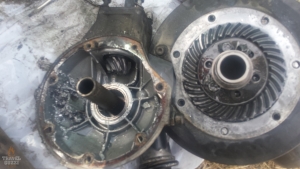 The inside of the casing had had a hard time with all that metal slamming around. Destroying most of the walls and whatnot, but other than a few scratches the crownwheel and pignon are fine. Spent some time cleaning the inside of the casing, getting all the metal bits out and coming up with a plan of attack to fix it all. Which meant getting new bolts, and those bolts are nowhere to be found in Glenorchy.

Come the next morning a German couple were enough to give me a lift into Queenstown, where I was pointed into the direction of Queenstown Commercial Vehicles. A guy from the NZ guzzi Facebook page said there was a good chance I would be able to find the bolts I needed right there. So I ended up with bolts in the right size, but not the right strength (8.8 again). With the bolts in my pocket I walked through Queenstown trying to find the right strength while getting seriously soaked by all the rain. Did I mention I had a double Fergburger yesterday? Coming straight from Shotover into Q-town there was no line, and my burger was ready almost instantly. Nowhere near as good as people told me. Overrated buns and meat that’s not worth standing in line for, but their marketing is up there with Apple.

Anyhoo, having no succes whatsoever to find the right grade bolts, It was time to try and back to Glenorchy with my bolts and some locktite. Doing it the cheap way that meant hitchhiking, which I had never done before. So off I went to the edge of town, put up the thumb on my left hand and cross my fingers with the other. After a good 30 minutes someone finally stopped, well… drove passed, slammed the brakes, reversed and said hi. A Polish guy that was nice enough to drop me off at the Fernhill rd turnoff, where he turned off and I continued my thumbing up and crossing fingers. After a good 40 minutes of hardly anyone passing and no one stopping I was done with and started to multitask even more. Walking, thumbing up, crossing fingers and silently cursing at mother nature for the rain that was still going strong. I mean… according to google maps it was only a 9 1/2  hour walk so how hard could it be with no sidewalk and people driving like idiots. 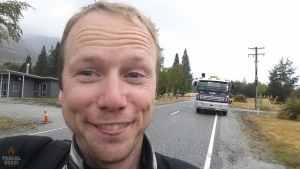 So 15 minutes after starting to walk a truck driver stopped to pick me up, and he also had to go to the Glenorchy campsite. Best moment of the whole day as you can imagine. On the way back the rain started to slowly subside and the truckdriver told me he hadn’t picked up a hitchhiker in years. Apparently he once picked up a girl, who demanded to be dropped off exactly where she wanted. So he kicked her out and then she went to cops and accuse him of rape….. Now if that story is true…. damn, no more picking up hitchhikers with my bike.
As you can see in the photo, it dried up by the time I got to the campsite. Bolts were put in, loctite was used, only 50% of the torque required was used due to the 8.8 grade bolts and then the waiting game began. 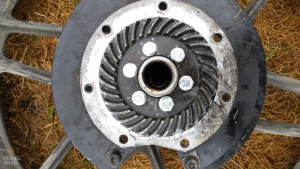 That game consisted of a lot of reading, strolling around quiet but beautiful Glenorchy and listening to an American couple whom were ridiculously loud in regular conversations with amazing topics. The thing I learned from them is to never, ever, ever, evah evah? Go with anything else than fish & chips… reason?

“The chef can’t fuck that up and you run the risk of everything else being a disappointment and a waste of money.” – Weird American

No I wasn’t sitting at their table, it’s just that with the volume they were conversing at even the Martians were interrupted in their every day life. With that amount of volume I just could not not listen in. Couldn’t leave either since I just got myself a drink -_-, hard life.