“Please note that during the following story, my back still hurt like hell. Forgot to mention that in the previous update but I fucked it up taking the rear-drive out of the bike”

The waiting game is over! Time to ride again, to Te Anau this time and onto Milford sound (or so I thought). Just after leaving Glenorchy a thought popped up in my head “did you tighten the oil drain on the rear drive?”, I stopped, tightened the bolt which was loose and dropped my bike when I wanted to take it off the center stand. Pickup it up again, the right hand mirror decided it preferred the ground over my bike and stayed with mother earth. Luckily just a plastic bit on the inside that broke so reasonably easy to fix. It was an amazing start to the day -_- . 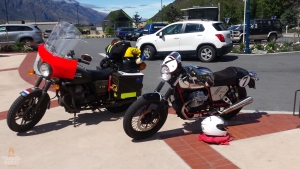 Ending up in Frankton around lunch time to meet up with Grant for a coffee and being introduced to some of his friends whom also ride and just happened to be there. Good coffee, good chat and a good way to have “delay” on your travels when you don’t really need to be anywhere anyway. I love that freedom, just decide what to do in the moment.

Bike looked OK so I continued my way to Te Anau to set up camp, beautiful ride, the blueness of lake Wakatipu with the white of the waves was breathtaking. Leaving the lakeside made the road a bit more boring so on I went. Reaching the campsite at Te Anau I noticed that my rear wheel was covered in oil….. not good :/. The rear diff threw almost all the oil out through the vent, at the time I thought it was just the gasket that was fucked and managed to get a replacement from the guy that owns the campsite (has some cool old cars). Put some new oil in, had some food, read a book, went to sleep, woke up, packed my tent and drove again. This time to fuel up and see what would happen, that 2 kilometer ride to the petrol station was enough to once again cover the side of the wheel in oil. Choices were made, phone calls failed so on I went to Invercargill and left the Milford sound idea behind. All that was in my mind was “get to Invercargill ASAP. That place should have all the stuff I need to fix it”. 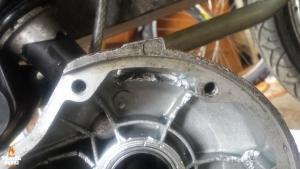 Met up with John Rice in Invercargill who was nice enough to offer me a place to sleep and a garage to work in. Managed to get the proper bolts in Invercargill and discovered the reason behind the oil on my rear wheel (see photo). Fixed it with a hose and liquid gasket, put everything back together and time for some more waiting while the loctite in the diff was hardening. So what does one do in Invercargill……

The worlds fastest Indian @ Hayes!! Is of course a must do for anyone visiting New Zealand, and when you’re a motorcyclist you don’t have an excuse not to go. You can even take someone that doesn’t like vehicles and drop them off in the area that has everyday household items ^^. Had a great day touring Invercargill with John, will definitely have to get back to him when I`m in the neighborhood. In the evening back at his place we somewhat planed my trip up to Dunedin and Christchurch, I just love working with maps and getting local knowledge about sites to see and whatnot. So a two day plan was made for me to do. 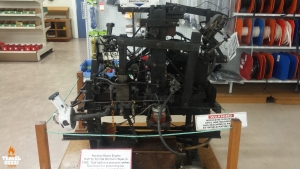 Wake up in the morning, have some coffee, start the two day trip from Invercargill to Dunedin, and arrive in the very same day. I got a little bit carried away with a bike that was working again :P. Straight through the Catlins with some really cool views and waterfalls. All in All I didn’t stop enough -_-. But hey at least I arrived in Dunedin and came across a lot of really old verhicles along the way (we’re talking early early 1900’s). Apparently there was a classic vehicle rally going in Dunedin with a lot of old stuff at the campsite that I stayed at as well. This meant I got to see a lot of cool vehicles while in Dunedin. 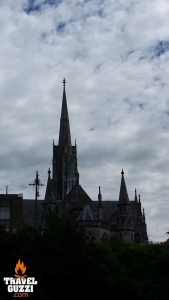 From the days I stayed there (I ended up leaving because of shit weather that was coming in) I decided that I prefer the vibe of Dunedin over any other town I’ve been to in NZ. Probably because it has a European feel to it that reminds me of home.  I ended up taking about a day on the Otago Peninsula, which is beautiful to ride even though some roads don’t go anywhere and you have to double back but hey… it’s pretty. Sharing the road on the Peninsula with those historic cars I was talking about made it even better. Just to bad it started drizzling halfway through the day which made me go back to my tent and just stroll around the town. Hiding in a pub (The Bog) from the rain, not eating their food which I regret :/.

Later that evening or the following morning (can’t remember) chatting with Sven on the phone about the weather, it was decided I would go up to Christchurch to enjoy the good life that he had been talking about. And do some couch surfing at his place, which my back loved! Fuck that was a nice change-up from the an airmatress.